TOGGLE :   from short tons into cups U.K. in the other way around.

Charcoal pieces, produced by burning a wood into clean carbon or else called charcoal. 2 liters volume of these pieces were precisely weighed on accurate scales to get their mass of 608 grams for this volume mark, 1L/304g. That measure converts to 40.6 oz per 1 US gallon. The density mass (of such, similar bulk) comes to 0.18 ounce net wt. per one cubic inch volume (9/50th oz/cu in for charcoal pieces). 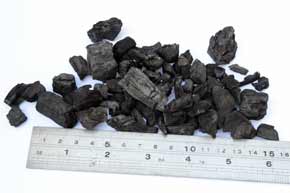 The main menu with a list of most measuring units for volume densities of powdered charcoal.

This online wood charcoal from cup imp into sh tn converter is a handy tool not just for certified or experienced professionals.

How to convert 2 cups U.K. (cup imp) of wood charcoal into short tons (sh tn)? Is there a calculation formula?

With the above mentioned two-units calculating service it provides, this wood charcoal converter proved to be useful also as an online tool for:
1. practicing cups U.K. and short tons of wood charcoal ( cup imp vs. sh tn ) measuring values exchange.
2. wood charcoal amounts conversion factors - between numerous unit pairs variations.
3. working with mass density - how heavy is a volume of wood charcoal - values and properties.

International unit symbols for these two wood charcoal measurements are:

In principle with any measuring task, switched on professional people always ensure, and their success depends on, they get the most precise conversion results everywhere and every-time. Not only whenever possible, it's always so. Often having only a good idea ( or more ideas ) might not be perfect nor good enough solution. If there is an exact known measure in cup imp - cups U.K. for wood charcoal amount, the rule is that the cup Imperial number gets converted into sh tn - short tons or any other wood charcoal unit absolutely exactly.

I've done my best to build this site for you- Please send feedback to let me know how you enjoyed visiting.