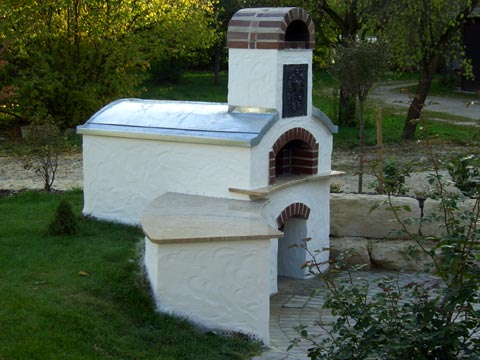 Description: Hello Rado,
six months have passed since I got Your CD.
Today was the day - Yeapii - I finished my oven - I am so happy, over the moon.

Do You remember me? Since we got our last email contact in February or March I had a lot of work. Those were still winter months.

I started the first week of April while preparing the garden to be planted. And then I worked only on weekends and some holidays. After the dome was built we had the first pizzas and liked it very much. So it was hard to go on because it was already possible to use the oven and invite friends to benefit of the good food.

I finally decided to go on and finish it. Two weeks ago I did the cement on the stones and today I finally made it white.

As You see I put a kind of working table at on side. It is made out of stone. It is called golden granite. The form is cut in a special way to get the perfect round form which fits perfectly in the picnic place.
On the front you see an old oven plate. It is out of steel and was used in the 1800th on wood fired ovens. Luckily my mother saved one on the old farm.

Next to the pizzas I did some progress in baking traditional bread loafs. It is a dark bread made out of flavour (1050) yeast, salt, water and a kind of sour dough.It is very traditional in our area and I love it. I have to get the oven very hot (2 hours) and then I clean it. Therefore the ash fall is very useful. Afterwards I put the dough into the oven with a special round form and then close the door. The oven works perfect and after an hour I take the brad out, put some water with a brush on the bread and bake it 10 more minutes to get a shining surface of the bread.

I get 14 breads at once which I freeze after one day. Unfortunately after giving some breads to friends and relatives I have to make new bread two weeks later.

I sent you you some pictures of the oven to show you what I did. I´m really proud on the oven because all the work has been done on my own. Only the metal roof was made from a friend of mine.

Hope you and your family are well and lots of other people also try to built their own oven. It is good fun and since it function we have more parties ever head.

Thank you very much for now,
Jorge