Firing and cooking part of this oven was created from fire bricks of an old dismantled ceramic kiln. Flaming pizza oven in natural limestone. 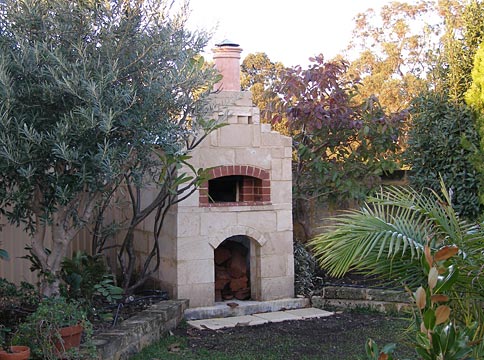 Description: Rado
Thanks for the plans - Here's some photos if you want to use them!

What's cooking? - We cook everything and anything from curries to roasts to pizzas and fish.

The dome was constructed out of ceramic kiln bricks that had been cut lengthwise at 76 degrees. This meant I could stand the bricks upright without the need for mortar, however I did need to extra reinforce the walls to take the weight - (That proved to be very challenging, thank heavens for a builder friend!!) The project was completed mid 2007 & has proved to be a fantastic success - now it is almost the end of 2008 and the limestone adds appeal as it has aged. The only problem is that too many friends know of its existence and frequently ask when, when, when, can we, can we can we :)