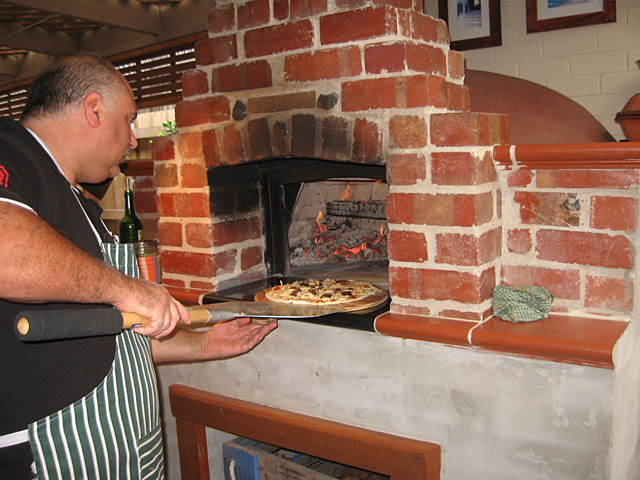 Pictures from the construction

Description: During our last trip to Italy in 2007 we drove from Sicily to Venice stopping along the way. Inspired by Italian culinary especially cooking in wood fired ovens, all I could think about was this oven and all the tings that I could cook in it. It was clear to me that for my own Italian culinary formulas first I needed a well functional oven. Having twenty years of experience in Italian pasty cooking which I no longer do professionally … and miss very much.

Right after we arrived back home from the holidays, I built my oven from scratch. Yes, using refractory bricks and yes then the mass was insulated properly. It had turned out EXACTLY how I wanted it.

We cook pizzas, bread and everything else in it all night, on a family get together. The next day inside goes the roast or biscuits depending how much wine we have on the night before. Thinking of building one?

The other day we cooked 48 pizzas, 3 trays of small chicken pieces, cleaned out the ash and baked about 16 small ciabatta bread rolls, and froze them for later. They were gone within a week. Now I have just brought a 20 liter dough mixer. Looks like I will have to start making bread more often and freezing it. Ever since the oven was built it is a large part of our lives. It's worth it heaps and the building was THE great experience.