I started to build these ovens after Alan Scott's building workshop. Pizzas or breads and other meals from these ovens are incomparable - this is The way for THE culinary practice. 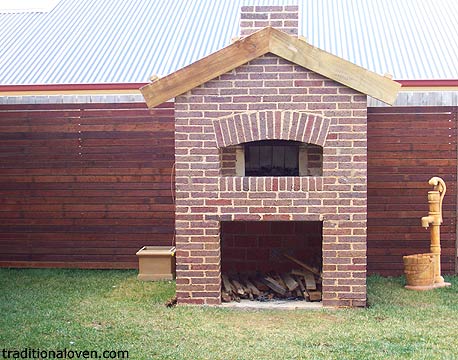 Above all: Best thanks to chef Scott Mcdougal for his cooking skills, without him and his great culinary arts abilities it would not have been such an experience at the recent party ... seriously his help was great!

Description: Firing and Cooking Practices:
At start oven was ready for pizzas in under an hour, but I had a large fire burning so now I have smaller fires in ( less stress on oven ) and it is almost exactly 1 ½ hours to heat it up and start with the first pizza. Then I wait for the oven cools down and can begin with long time roasting or baking (as everyone knows by now these ovens hold baking temperature for 4-5 hours) it can be reloaded several times after just one firing. 15 people are coming for a visit on Sunday, friend is bringing 4kg meat to be roasted. I will email photo on how it went.

Although Pizzas are the most common food to cook in, I have a huge interest in Breads, such as Sour Dough and maybe even Alan Scott's legendary Desem Bread, but at first ill start with pizzas and also meats. Desem bread has a very strong following in the bakers' communities.

The Oven is a standard Alan Scott design down to the last millimeter. I attended a three day workshop with Alan Scot at the Moorooduc Estate Winery in Moorooduc Victoria (You must try there wines) and the facade being my own finish. I wanted a basic simple facade without all the Bells and Whistles that you find on some structures.

This is the final product less a splash off paint. A thank you to Rado Hand, for some extra building info and firing and cooking techniques on his website.