Italian forno wood fired pizza brick oven and fireplace pictures. Not just simply pizzas, all other culinary is being practiced in my place. 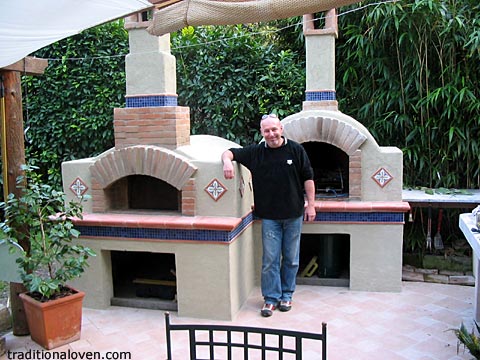 Description: I am just a guy who lives in Italy and who wanted an oven because I like pizza.

The open fireplace on the right doubles as a gas fired grill just by placing a double gas burner and heavy solid grill in the fireplace and having a hole in the floor for a removable tube for the gas line. When fired up the forno the chimney draws like a dream.

Cooking in the 32" x 36" size oven is great and our fireplace option is a nice feature in addition. But the gas grill is so convenient that we will probably be using it 99% of the time.

Rado, I probably would not have built the forno without the fine inspiration from your website. This afternoon we have just had the most delicious pizza ever out of our forno, which is an amazing statement, given that we have spent a lot of time eating pizza at various restaurants here in Italy.

After an intense competition among friends, the clear favorite components were speck (smoked), Gorgonzola cheese, onions, and red peppers. Riccardo, the builder of our forno, was crowned the champion chef and culinary specialist teacher. Here are some pictures of the day.

In the back of the oven, you can see the stinko which has been cooking for our dinner later today. In the picture of the overall layout, the oven is on the left, in the middle is the gas/firewood grill, and the marble table for making the pizza dough is on the right. These Italians really know how to do it.