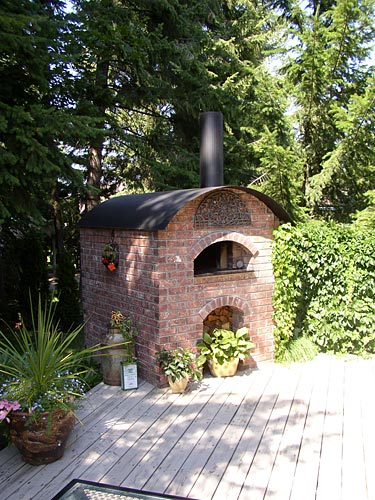 Description: Rado, here are some pictures of our oven in British Columbia, Canada. Used your design with some modifications. The oven was built into our existing raised wood deck. We started in April and finished in July 2007. Only had weekends and evenings to work on it. Never worked with brick before, but soon had the hang of it. Used good quality diamond cutters and took my time on all stages. All materials were new. We went with a barrel style roof made out of metal with a sealed chimney facade. There is a metal flue within attached to the brick. We cover the chimney with an old wok top when it rains or snows. We have cooked for over 40 for an office party and we regularly have my rugby team over. We cook mostly chicken and meats. Will be trying our had with bread soon. Lots of entertaining food such as bruchetta, stuffed mushroom caps and pizzas. We also do overnight cooking after the initial firing for tough cuts of meat and ribs. Almost cooks the bones tender enough to eat. We start the fire with Cedar, then small sticks of Douglas Fir, then load on the Birch hardwood to get the heat going. All the wood has been dried for over two years in order to eliminate smoking as much as possible. We use the oven year round.
Thanks, John