back to board Main Page

Re: Quest for a Better Pizza Stone

From the WFO board 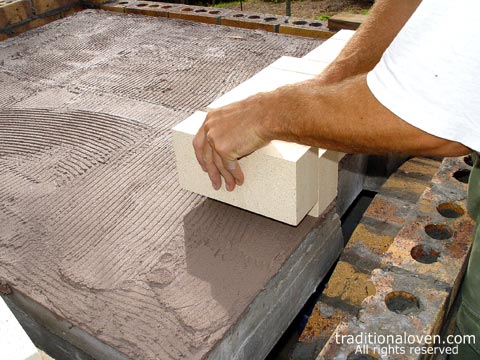 Thanks for your reply. I went with the fire brick. The picture shows the most common form of fire brick, mine is the same stuff except larger (12" x 12" x 2"). You can also get fire brick in half tiles that only 1.25" thick. I did have to reinforce the bottom shelf of my oven with some kiln posts that I bought from a ceramic supplier.

My kiln posts were $3 and my 2 fire bricks were 6 bucks a piece with another $10 for the cuts I needed to make a 15 x 18 shelf. I had read on another website instructions on "gassing" a pizza stone, starting at 100 degrees (f.) and then increase 100 every hour until 600 degrees. I did that, and to my pleasant surprise, the bricks turned slightly yellow and the propensity to loose pieces of grit is gone. The only catch in this equation, is that after all this work, I've recently adopted a low carb diet so, it'll be a few weeks before I'm able to eat pizza.

It looks like a winner though. I was a little afraid the thickness of the brick would affect how things would cook on the top shelf but, after baking a batch of bacon, it appears that the gap around the stone is enough for the top of the oven to work normally. When I do my pizza, I'm putting cheap (home depot) 1/4" tiles on the top shelf as well to see if I can get some heat emanating from above like a real pizzeria. Eventually I might go with the soapstone, finances permitting. I've found a supplier that will sell me a 15 x 20 x 1.25 slab for $100. We'll see.

by Rado Hand on Google+