The flue vent and hot-air passage. How Wide & Deep are they? 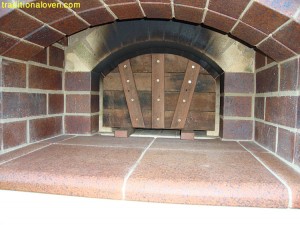 What is the optimal flue width and depth? This is one of the important questions, especially in indoor ovens. Say that the entry opening to the oven is 10″ – 245mm high and the width isn’t crucial (but most commonly I make the entry 400mm = 15-3/4 inches wide.) The size of the flue, which is the boxed space around and above the entry surface area (also called hood or air vent or just a box) has to be spacious enough so completely all the exhaust fumes, 100% of the hot air gases exiting the oven, all gets directed only upwards into the hot air passage and through the chimney they travel out.

It’s not really the chimney as we know it because there aren’t the draft conditions present because that’s not needed in outdoors ovens system with the straight up hot-air passage. These designs function completely properly without the draft (but still, if there was the pull in a chimney then it’s fine too). 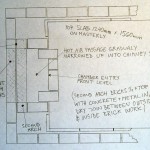 Basically, this flue needs to be wider at least by 1″ – 25mm on each side than is the actual entrance width (if it is even wider than that, it’ll be only for benefit – less heat radiation onto the hood box sides plus more room for work on the working-surface area or to just rest elbows on. This is why I call the surface a “pot resting surface”.) Because it is practical, I make it no less than ~ 5″ = 130mm wider on each side. In the new MTo design this outside hood box is 715mm = 28.15 inches wide internally from side to side. The total width of the whole surface makes it roughly 6-1/3″ – 160mm wider @ each side. This flue box also nicely blocks a possible wind blowing into the oven from the outside and that aspect is very practical and effective. 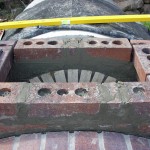 Now, the arch holding the back-side-wall of the hood/chimney doesn’t need to be exact, it will perfectly do if it’s 2 or 3 inches – 5mm to 75mm wider, 3 inches – 75mm higher next the entrance. This MTo is designed the way it accommodates any style or type of refractory part (not just the itself MTo firebrick design chamber) instead an igloo round floor, or square, or prefabricated/kit purchased domes fit it smoothly. The height of the decorative arch in the outer front facing wall also can be slightly changed; however don’t make it too much higher (if you wanted to make it higher say by 10cm – 4″, then increase also the depth sizing marginally.)

How deep should the flue/hood be?

* That was for the flue hood width :
A more IMPORTANT component to emphasize is the depth-measure of the hood box! It should be minimum 13″ – 33cm internally (13 inches and deeper. 15″ – 38cm ideal in indoors ovens). “Deeper”, which is the length between the inner side of the front facing wall and the oven entry point. Because the hot air exits under not too sharp radius the flue simply needs to be this deep.
In here as per the internal depth aspect, as mentioned above, relates also the minimum height of the deco wall entrance arch. The formula is; the deeper the smoke collection hood the higher the from wall deco arch can be.

Then this flue can be gradually narrowed upwards. Then roughly 2 feet – 60cm + from the actual outer top level of the oven, only then a chimney pipe or chimney liner can be connected, if needed because most often the simple brick work will do normally. It is always wise to get the widest diameter sold (I attached you one high quality hard s/steel fabricated type with a cap I get manufactured at times. It looks marvelous, speeds up work. Just keep in mind that children should not be able to reach it as it gets quite hot. You can buy flexible chimney liner lengths or kits as well and easy DIY guide with them.) 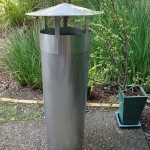 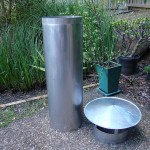 Any sheet metal manufacturing business will make these to any specific size. Usually the more pieces are ordered equals to better price per each.

It is a simple principle easy to understand, notice the stage among the MTo building sequence pages. Most often I build the flue (box, hood) out of clay house bricks. But if there is not enough room for making the depth or width, instead of thick house bricks, a box out of a corrugated iron sheet or copper sheets, etc., with some nice rivets or some art work on, will add a nice character for the oven too. It is important in the first place that the correct functionality will be maintained.

** I don’t know why but, sadly very-often people make it very small, because they saw how someone else’ve done that. Or they install there only a stainless steel pipe, perhaps thinking this pipe will suck in and drag out through its whatever diameter all the exhaust fumes. Not so! Even a 1′ – 300mm pipe just on the outside above the exhaust area of the chamber isn’t nor won’t be enough to collect all smoke or the heat (unless a strong draft was introduced, although it = who would want to force vacuum the precious heat out from the oven that way?!).

But back to the box size-depth; If this is too small like that what happens, the smoke gets into the room or eyes cause not all exhaust fits in there and the walls get heated. In such a case, this is exactly when ovens get carbon soot color on the outside just in the outer front decoration above the decorative entrance arch.

* Did I mention that both this box and the chimney are very easy to make? I think I should if I did not.
Rado

Respond to the The flue vent and hot-air passage. How Wide & Deep are they? article: