Article by Roka Refractories Company based in beautiful Greece.

The earliest ovens, known as “Earth Ovens”, were manufactured in Central Europe. This kind of ovens is pit dug into the ground and then heated prior to cooking various foods. Archaeologists found ruins of ovens in which people were roasting boiling pits in order to cook mammoth. In the region of Ukraine pits were found with coals dating from 20,000 BC. It is believed that every house used to have mammoth bones used for heating and cooking.

In Pre-dynastic Egypt, 3400 years ago, each house used to have an oven in the center of the settlement. Using the technology of Earth oven, the cooking process was confined to slow roasting of the food.

Many different kinds and bizarre ancient ovens have been found by archaeologists but the history of the wood burning oven as we know it today stems from Ancient Greece and the renowned “Clay Oven” or “Ipnos”. Ancient Greeks turned cooking into art ever since front loaded bread ovens were first developed by them. With the pass of time, Greeks developed many different shapes of bread ovens that varied from one side of the country to the other. A significant discovery of a portable ancient Greek oven dated from the 17th Century BC is hosted in the Cycladic Museum of Art (see Image 1). After years of research, scientists concluded that many families developed bread making into profession as bread was prepared in houses by trained workers and sold in the “Agora” (i.e. ancient market).

The Cycladic civilization had clay oven deeply in its culture. Ovens were traditionally heated with dried brushwood meticulously picked from the countryside. On the other side, “Minoes”, which were their competitors based in Crete Island were heating ovens with olive wood since olive cultivation was widespread across their regions. Ovens in central Greece were heated with oak and beech wood. Bread was baked after the ashes and embers were pushed aside or swept out of the oven. The remaining heat was not wasted: food baked in lower temperatures followed, and after that the heat was used for preparing rusks and drying fruit and nuts for the soldiers since this kind of food is more time resisting than any other kind of food.

Another kind of Oven according to the kind of the bread

Serials were the basis of nutrition of Ancient Greeks during the “Minoan”, the “Mikiniaki” and the Classical period. It is indicative that Ancient Athens of Pericles was importing from Ellispontos 17,000 tones of serials in order to create a kind of bread that was looking like pie filled with “feta” cheese or even with honey. In order to make the bread rise they used some kind of alkaline as catalyst of the procedure. 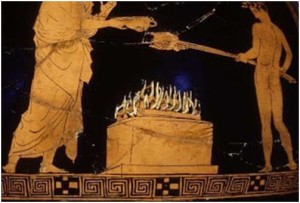 Hundreds if not thousands of famous Ancient Greece art works exists depicting – Cleaning and crushing the grain; Making the dough; Cooking the flatbread over the wood fire.

The zyme in the house was baked in tall ovens of argyle. Another easier procedure was by burning coals known as Earth Ovens and the covering of the cooker was with a cap at the shape of misty (πνιγεὐς).

When the ground was hot enough, coal was getting removed to place bread instead. After that, the coal was transferred to the cap in order to maintain the temperature.

“Rock Ovens” appeared after many years in the Roman Civilization. Solon, a law giver from Athens (6th century BC) stated that bread should be consumed only during Olympic Games as it was a very expensive product for the civilians. After the Classical Period of Pericles every house used to have an oven thanks to the financial growth.

Ancient Greeks turned bread making into science by constructing different types of oven according to the recipe of the bread. The wheaten “άρτος” (i.e. bread) was getting baked in tall ovens whereas the barley bread was getting baked in short ovens (see image 2), placed on earthen vessels used for cooking called “ζυμίτης” (see image 3). The bread without barm was getting baked on heap of coals, called “όψον” (see image 4). Portable ovens, which were very famous as well, were usefully light and compact and featured two handles for easy transportation. The fire was fed with oxygen through the rectangular apertures of the base. The clay cover prevented the heat from being wasted in the atmosphere as depicted in image 5.

Platon (c. 400 BC) pictured the ideal state (i.e. ιδανική πολιτεία) where men lived to a healthy old age on whole meal bread ground from local wheat. Socrates on the other side, suggested that this proposal meant the whole population would be living on pig-meat food.

Ancient Romans were calling Greeks bread eaters because Aristofanis, in his comedy “Ειρηνη” (i.e. Piece), uses the expression «ἔσθειν κριθὰς μόνας», which means “I live only for bread”.

The origin of Italian pizza can be traced in ancient Greece and a flat bread called plakous (πλακοῦς, gen. πλακοῦντος – plakountos) which was flavored with toppings like herbs, onion and garlic 7,000 years ago.

The Archaeological community was surprised when 30 brick ovens were found in superb condition at the ruins of Pompeii. This Roman City was buried in molten ash after Mount Vesuvius erupted in 79 A.D. It was only re-discovered 1700 years later. In 1748 archaeologists started to uncover the once forgotten City. The work at Pompeii carries on to this day. The bread ovens that were found still had petrified bread in them. These ovens that were inspired by the Ancient Greek civilization come in different forms and are built with craftsmanship. They were constructed mainly with bricks, ceramics and argyle. Round ovens built with bricks or even local stones have been built in Italy seemingly forever. Virtually every Tuscan farmhouse has, or had, an original brick or stone oven.

Roka Refractories was founded in 1989 in Thessaloniki, aiming at the production of special fire bricks, used in fireplaces, kilns, barbecues, furnishes and pizza ovens.

The company constitutes the only manufacturing unit of its kind in Greece, covering up to 90% of the domestic market, meeting the exigencies of international competition. The innovativeness followed by the high quality of our products are highly estimated, as attested by the export network which numerates 14 EU plus non EU counties.

Our bricks belong to the “fireclay refractory bricks” category

Our first production, back in 1989, comprised only red firebricks since the raw materials in Greece have been ideal for this product from the early beginnings of ceramic ovens history. However, a few years later we responded successfully to the demand for yellow firebricks. With the pass of time, we managed to deploy the accumulation of knowledge, offering products of highest quality at competitive prices.

In 2009, after years of research, we celebrated the 20th birthday of the company with the launching of the innovative dark series of firebricks. Brown and granite – colored firebricks came into existence. The elevated rate of manganese in this particular series avouches a superior result in terms of thermal performance and thermal accumulation. Both architects and engineers welcomed eagerly the new products.

In 2010, we completed our gamut with the launching of black, the grey and white firebricks products.

Company Roka Refractories possesses its own quarries for quality raw material, securing, hence, incessant flow of this raw materials and high constancy plus consistency in their manufacturing process. The company’s installations cover a 22,000 m² region, where the whole production processes take place. With a production capacity of 200,000 tons per calendar year, Roka Refractories nowadays is amongst Europe’s largest players.

After years of research, our Research and Development department invented the new series of “colored firebricks”. Chocolate, Black, White, Granite and other colors came into existence and the global market embraced immediately the idea to “color your flame”

Our inspiration acted as a muse of creation for the manufacturers of barbecues and ovens who conceived state-of-the-art models, fulfilling every aesthetic architectural preference. Some examples are found below:

Fireplace constructed in a villa with black firebrick

Barbecue Set constructed under the supervision of architects in Mykonos Island with black firebrick.

Firebricks most times are used for the construction of ovens and barbecues in which people bake food for their friends and for their families so it is worth noting that Roka Refractories has a food suitability certification that their firebricks they are using are harmless:

World’s tallest bread oven is 12 meters high and was constructed by the engineers of the natural constructions company “COB” who combined natural materials such as clay, sand, straw, goat hair and ROKA REFRACTORIES innovative firebricks. The design and the materials were chosen by the designers of the project and famous architects Claudio Silvestrin and Giulianna Salmaso. The oven was made after the ruins of a bread oven found by Archaeologists in the geographic area of Cyclades, dating to the 15th Century BC. This piece of art is located at the unique luxurious bakery Blé.

Respond to the History of Wood Burning Ovens article: